Changes: The Practical and the Pretty

Another month of slow-but-steady progress on Auto Fire.  A solid amount got done, although some was tangible and some was straight up infrastructure.

There's a condition system now, where entities can be stunned, set on fire, made to skid, be blind, etc, and that will last a fixed number of turns before automatically removing themselves. Nothing super fancy, but it allowed me to do stuff like cause a vehicle to spin out when it hits an oil slick.

It also allowed me to give the player's radar more functionality, because it now "paints" targets within a specific radius for a set amount of time. Ideally the player should be able to build up sustained fire on a single opponent, or race through a group (at high speed to avoid being shot) and hit everyone with a radar ping before swinging around and taking advantage of the higher hit rate (and eventually critical hits spurred by this).

There is a new icon system above vehicles to show their current conditions, which hopefully will teach players more about the advantages of speed and choosing targets.

I also did some work on the to-hit calculations... I was using a "Diablo-style" hit percentage generator that tended to not miss a lot... the greater the defense, the more the hit chance headed towards zero, but in an asymptotic fashion. What happened there was that it compressed the viable range of hits more than I would have liked. Improving or reducing your hit chances didn't really seem to have a big impact.

So, I switched back to a flat hit percentage generation where attack and defense are directly opposed totals (more like D&D or other pen-and-paper games). It seems a bit archaic, but I put the minimum hit chance at 10% and reward the player with crit bonuses if they exceed 100%... and you definitely notice if you're moving at speed and are harder to hit, or if you get a hit bonus from radar painting your target. You can read a bit more of the nerdery here.

Finally, I found a bug that was causing enemies to hit you 100% of the time no matter what your defense or how fast you go! Now moving at higher speed is significantly more meaningful.

I did a bit of work on weapon resolution to clean up some weirdness, as well as allow for effective area effects over various volumes. I can have weapons with blast radius at impact, cone effects, lines, and more. This gave me some vastly improved versions of scatterguns, flamers, and so on.

I also switched over my missiles to LeanTween (a great Unity package that's freeeee, although the Editor that goes with is worth throwing a few bucks at) so that I could use more sophisticated arcs (splines, eases, etc) for the projectile travel. This gave me some great drunk missiles and so on.

The Incinerator by Burnside

A somewhat smaller bit of work but vastly important was looking into problems I was starting to see in my city layout.

A couple of years ago I put multiple months into a city generation method that took pre-crafted blocks and spliced them together, street-to-street, with props and so on. It worked pretty well... However, lately the cities seemed to have wayyyy too many skinny alleyways and dead-ends, even though I remember putting a fair amount of effort into reducing these. Worse yet, I'd started to see some passability and playability issues, which I know I did checks for. Ugh. I love dusty Mad Max wastes, but the cities are just as important a part of the game and they weren't fun.

I spent some time trying to re-learn what the hell the 2016 version of me had made. For a little bit I thought 2016 me was a bit of an idiot... but it turns out he was somewhat clever. It was 2018 me who introduced a number of bugs that caused loops to no longer form... that guy was a jerk. Specifically I had some code that overlaid roads over previously populated obstructions to create extra loops, and those no longer overlaid properly. In addition, my passability checks were not properly busting holes through the buildings and obstructions when needed.

I added a bit more two-lane roads and discouraged alleys from forming very often. In addition, I added some new block types to my definition that had fewer buildings, so some extra open spaces could be formed. I can pretty much make an infinite number of city block components, so I'll keep adding ones that give some more driving freedom. 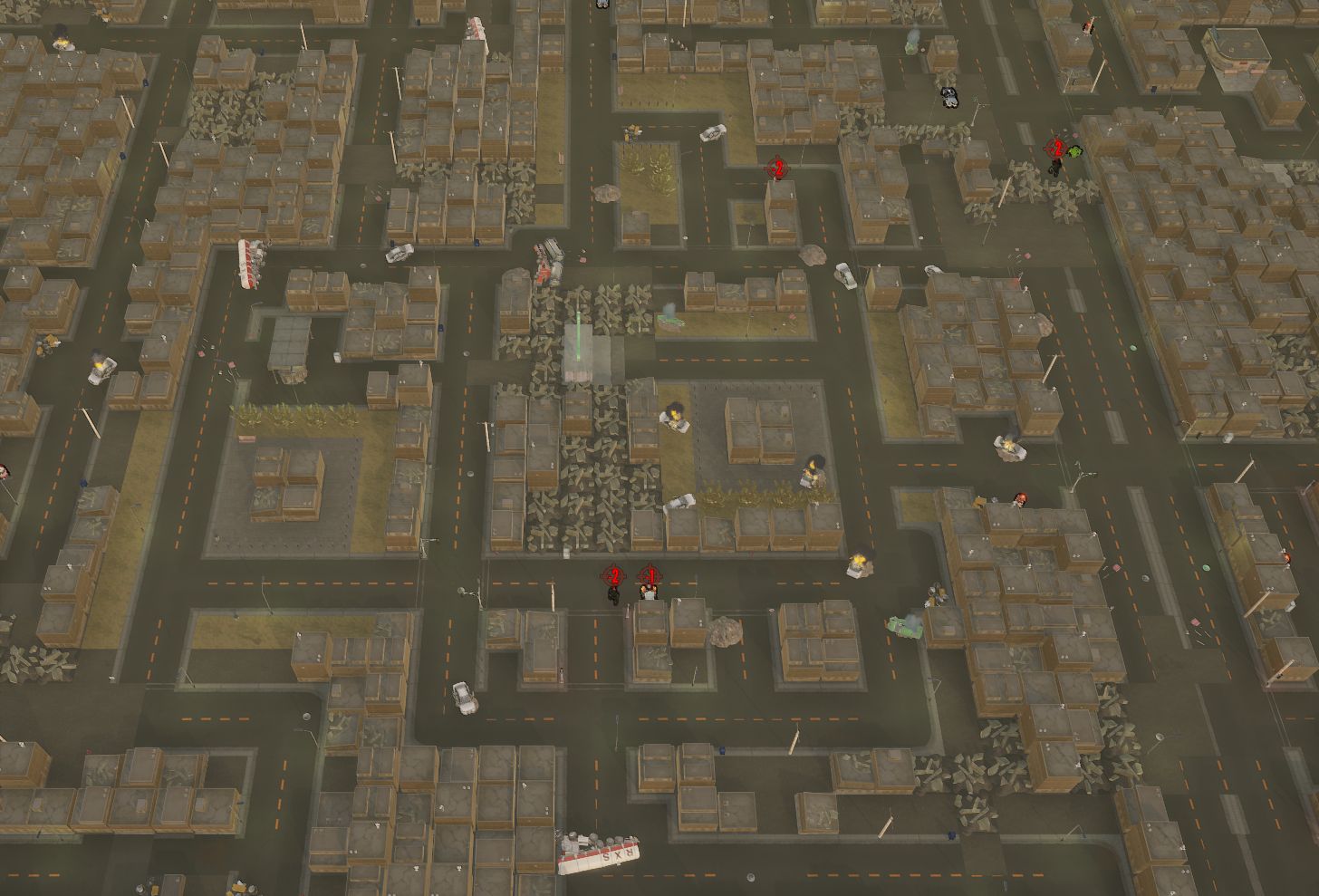 All of this is in anticipation of a new release, which I'm ready to get out in the next few days.  As always, I hope you enjoy.

I think I last saw this game at the roguelike celebration, it looks like it's improved a bunch. Nice work and thanks for sharing your updates.